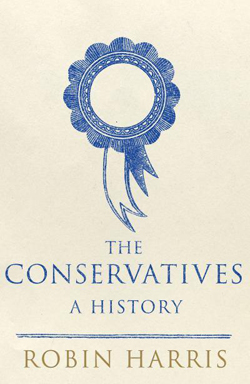 The Conservatives – A History

The history of the Conservative party has, extraordinarily, rarely been written in a single volume for the general reader. There are academic multi-volume accounts and a multitude of smaller books with limited historical scope. But now, Robin Harris, Margaret Thatcher’s speechwriter and party insider, has produced this authoritative but lively history book which tells the whole story and fills a gaping hole in Britain’s historiographical record. Taking as his starting point the larger than life personalities of the Conservative Party’s leaders and prime ministers since its inception, Robin Harris’s book also analyses the interconnected themes and issues which have dominated Conservative politics over the years. The careers of Peel, Disraeli, Salisbury, Baldwin, Chamberlain, Churchill, Eden, Macmillan, Heath, Thatcher, Major, Hague and Cameron together amount to an alternative history of Britain since the early nineteenth century. This landmark book is essential reading for anyone with an interest in history or politics, or anyone who has ever wondered how Britain came to be the nation it is today.