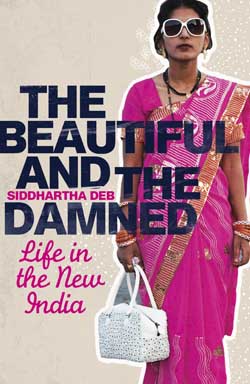 The Beautiful and the Damned: Life in the New India

From leadership seminars in fancy hotels to medieval figures walking from town to town looking for work in small town factories; from the naïve waitresses working in the mecca of five star hotels to farmers struggling to grow the right crops for the 21st century, Siddhartha Deb’s book is the riveting, moving, darkly comic, brilliantly told story of modern India. With the novelist’s vision, reminiscent of V.S. Naipaul’s An Area of Darkness, combined with the modern narrative force of Maximum City, Deb’s account paints a portrait of this country in turmoil through the story of its people: aspiring and deluded, desperate and hopeful, beautiful and damned. Taken from Penguin Books