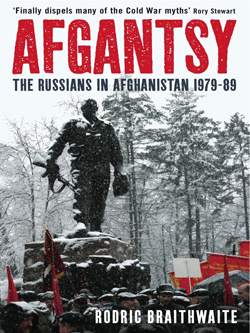 In a timely and eye-opening book Rodric Braithwaite examines the Russian experience during the Soviet war in Afghanistan. Basing his account on Russian sources and interviews he shows the war through the eyes of the Russians themselves – politicians, officers, soldiers, advisers, journalists and women. As former ambassador to Moscow, Rodric Braithwaite brings unique insights to the Soviet war in Afghanistan. The story has been distorted not only by Cold War propaganda but also by the myths of the nineteenth century Great Game. It moves from the high politics of the Kremlin to the lonely Russian conscripts in isolated mountain outposts. The parallels with Afghanistan today speak for themselves.’A superb achievement of narrative history, sensitive writing and exciting fresh research’: so wrote Simon Sebag Montefiore about Rodric Braithwaite’s bestsellerMoscow 1941. But those words, and many others of praise that were given it, could equally apply to his new book. Taken from Profile Books