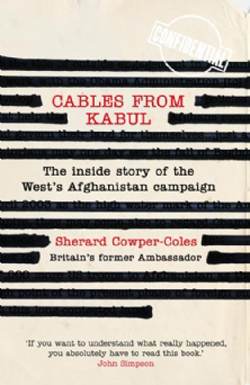 Cables from Kabul: The Inside Story of the West’s Afghanistan Campaign

A frank and honest memoir by Britain’s former ambassador to Kabul which provides a unique, high-level insight into Western policy in Afghanistan. For three years, from 2007 until 2010, Sherard Cowper-Coles was on the diplomatic frontline in Kabul as the West’s mission in Afghanistan sank deeper into crisis. First as British Ambassador and, later, as the Foreign Secretary’s Special Representative, he witnessed at first hand a struggle that by the time he left was swallowing billions of pounds of taxpayers’ money a year, and had already cost the lives of more than 2,000 coalition troops, including nearly 350 British soldiers, as well as tens of thousands of Afghans, in and out of uniform. In Cables from Kabul he offers a ringside seat in this unfolding drama in a high-octane narrative that transports the reader from the backstreets of Kabul and fly-blown villages of the Helmand Valley to the corridors of power in London and Washington. Packed with colourful portraits of major political and diplomatic players such as President Karzai and the US Special Representative Richard Holbrooke, the book gives a rich flavour of embassy life in one of the most dangerous places on earth. With his unique, high-level insight into the West’s policy in Afghanistan, Cowper-Coles raises fundamental questions about the viability of the whole Afghanistan project, even after the death of bin Laden. While paying fulsome tribute to the bravery of our soldiers and the tactical success they are undoubtedly achieving at a local level, he asks whether this will be enough to secure within three years the wider strategic goal of stabilising Afghanistan to the point where the Afghan authorities can govern the country without outside intervention. As Our Man in Kabul, nobody is better placed to tell this story. Powerful, witty and astonishingly frank, Cables from Kabul explains how we got into the quagmire of Afghanistan, and how we can get out of it. Taken from Harper Press