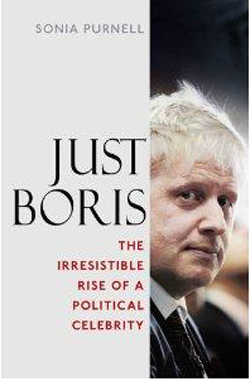 Just Boris: The Irresistible Rise of a Political Celebrity

A major and controversial new biography of one of the most compelling and contradictory figures in modern British life. Born Alexander Boris de Pfeffel Johnson, to most of us he is just ‘Boris’ – the only politician of the age to be regarded in such familiar, even affectionate terms. Uniquely, he combines comedy with erudition, gimleteyed focus with jokey self-deprecation, and is a loving family man with a roving eye. He is also a hugely ambitious figure with seemingly no huge ambitions to pursue – other than, perhaps, power itself. One of the most private men in public life, we all know of Boris, but so few can truly claim to know him. He invites attention, but has evaded scrutiny. Now, from the vantage point of a once close colleague, Sonia Purnell charts his remarkable rise and offers the first forensic account of just how he did it. Drawing on hundreds of interviews with Boris’s friends, rivals, admirers and enemies, this revealing biography examines how a shy, young boy from a broken home grew up to be ou r only box-office politician – and most unlikely sex god; how the Etonian product fond of Latin tags became a Man of the People – and why he wanted to be; how the gaffe-prone buffoon charmed Londoners to win the largest personal mandate Britain has ever seen; and how the Johnson family has built our biggest – not to mention blondest – media and political dynasty. At times, allegations of infidelity, journalistic chicanery, rivalries with fellow Tories and scandal at City Hall have threatened to upset his rise, but still it continues. With his unruly mop of hair, trusty bicycle and the surest of popular touches, he remains a Teflon-coated breed apart – but for how long? In Just Boris Sonia Purnell unravels this most compelling of political enigmas and casts light on his record and his character. Finally, she asks whether the Mayor who dreams of crossing the Thames to Downing Street has what it takes to be Prime Minister.