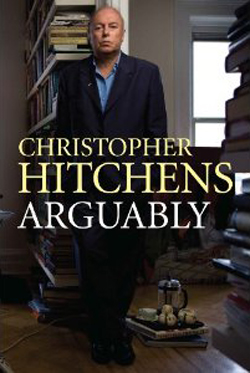 For forty years, Christopher Hitchens has been at the epicentre of the battle of letters in Britain & America. This blockbuster volume is the collection of a lifetime. ‘As soon as we abandon our own reason,’ wrote Bertrand Russell, ‘and are content to rely upon authority, there is no end to our troubles.’ For over forty years, Christopher Hitchens has proclaimed truth where others have spun falsehood and written, with passionate commitment, on matters that others fear to broach. This volume of essays spans Hitchens’ whole career and encompasses his writing on politics, literature and religion. It is the most comprehensive collection of the work of the finest English essayist since Orwell.  Arguably contains all aspects of Hitchens’ wide repertoire as journalist, polemicist and critic. Divided into sections such as: ‘All American’, ‘Eclectic Affinities’ and ‘Foreign Quarrels’, Hitchens unfolds his views on subjects ranging from Clinton to Kissinger; Powell to Proust. Hitchens’ life has, above all else, been one of defiance and wit, courage and humility: in an age of digital punditry and twenty-four hour hucksterism, he has been a voice of reason amid the clamour, making his indelible and brilliant mark on politics and literature on both sides of the Atlantic. While his many books exist as a formidable legacy, it is his mastery of short-form journalism and criticism that constitute his lasting claim to greatness. Arguably is a unique anthology and the indispensible companion to the Anglosphere’s pre-eminent political writer. Taken from Atlantic Books