The longlists for The Orwell Prizes 2021 are announced today, Friday 9th April.

The books and reporting across the four Orwell longlists tell the story of a staggering year.  The borderless nature of the Coronavirus crisis is reflected in the international scope of the stories, from works of history that illuminate our political predicaments, to novels that bring fresh, human perspectives on political stories, all revealing how the virus has intensified pre-existing anxieties, whilst introducing a new set of concerns.

The thirteen books on the 2021 Political Writing longlist take in conspiracies, care, environmental crisis and political power. One central theme is the value and vulnerability of truth, from restoring forgotten histories to the consequences of widespread mistrust in our institutions. The full longlist is:

Twilight of Democracy: The Failure of Politics and the Parting of Friends by Anne Applebaum (Allen Lane)

Labours of Love: The Crisis of Care by Madeleine Bunting (Granta)

Eat the Buddha: Life and Death in a Tibetan Town by Barbara Demick (Granta)

The Hitler Conspiracies: The Third Reich and the Paranoid Imagination by Richard Evans (Allen Lane)

Why the Germans Do it Better: Notes from a Grown-Up Country by John Kampfner (Atlantic Books)

Our Bodies, Their Battlefield: What War Does to Women by Christina Lamb (William Collins)

History Has Begun: The Birth of a New America by Bruno Maçães (Hurst Publishers)

How Spies Think: 10 Lessons in Intelligence by David Omand (Viking)

Recollections of My Non-Existence by Rebecca Solnit (Granta)

The Interest: How the British Establishment Resisted the Abolition of Slavery by Michael Taylor (Bodley Head)

The judges for the 2021 Orwell Prize for Political Writing are: Anand Menon (chair), Professor of European Politics and Foreign Affairs at Kings College London and Director of the ‘UK in a Changing Europe’ initiative; Angela Saini, award-winning journalist and broadcaster, and author; Richard Ekins, Professor of Law and Constitutional Government at the University of Oxford; and Rosemary Goring, author and columnist  with the Herald and the Sunday Herald.

Anand Menon, Chair of Judges, commented: “Selecting thirteen books from the wonderful selection of works submitted has not been easy. However, we are delighted with a longlist that covers everything from race and identity to conspiracy theories, from the development of modern Tibet to the lesson we can learn from Germany, from the problems confronting the care sector, to the challenges facing spies. This collection of books is a testament to the role that political writing can play not only in explaining but also challenging the state of our world.”

This year’s longlist of twelve range across place and time, from counterfactual historical fiction, to reflections on identity and community, to apocalyptic visions of climate breakdown. This is the third year that the Orwell Prize for Political Fiction, sponsored by the Orwell Estate’s literary agents, A. M. Heath, and Orwell’s son, Richard Blair, has been awarded. The prize rewards outstanding novels and collections of short stories first published in the UK that illuminate major social and political themes, present or past, through the art of narrative. The full longlist is:

Leave the World Behind by Rumaan Alam (Bloomsbury)

The Vanishing Half by Brit Bennett (Dialogue Books)

The Death of Vivek Oji by Akwaeke Emezi (Faber)

The four judges for the 2021 Orwell Prize for Political Fiction are: author, broadcaster and academic Delia Jarrett-Macauley (chair), former winner of The Orwell Prize for Moses, Citizen and Me; the historian and writer Andrea Stuart; Bea Carvalho, head fiction buyer at Waterstones; and Mark Ford, professor at University College London, author and poet.

The Chair of Judges, Delia Jarrett-Macauley, commented: “Whilst this is a truly international list of books, it also reflects the way that global politics is experienced: as national, local and personal. Fiction can map these connections in fresh and exciting ways, showing us complex resonances across history, and between continents. Ranging from the quietly political to overt explorations of issues such as war, race and climate change, these twelve novels demonstrate that politics is not just a question of the intellect, but of the imagination too.”

The 2021 Orwell Prize for Journalism longlist features the year’s best political commentary alongside brave and methodical collaborative reporting, on subjects from the impact of Covid-19 in the UK to authoritarian impunity across the globe, all in pursuit of Orwell’s own ambition ‘to make political writing into an art’. The full longlist is:

The five judges for the 2021 Orwell Prize for Journalism are: Carrie Gracie (chair), former BBC China editor and author of ‘Equal: How We Fix the Gender Pay Gap’; Clive Myrie, multi-award winning journalist, and broadcaster; Iain Martin, editor, publisher and co-founder of Reaction; Kamran Abbasi, doctor, and executive editor for content at the British Medical Journal; and Rosie Blau, editor of the Economist’s 1843 Magazine.

Sponsored and supported by the Joseph Rowntree Foundation, The Orwell Prize for Exposing Britain’s Social Evils has a unique remit to encourage, highlight and sustain original, insightful, and impactful reporting on social issues in the UK that has enhanced the public understanding of social problems and public policy, and welcomes reporting that uses investigative intelligence to pursue new kinds of story, ones that may also extend the reach of traditional media.

The Prize is named in recognition of the task Joseph Rowntree gave his organization ‘to search out the underlying causes of weakness or evil’ that lay behind Britain’s social problems.

Professor Jean Seaton, Director of The Orwell Foundation, commented: “Journalism has rarely been under such pressure, yet this longlist shows how hard-won investigative work, personal commitment, and reporting which keeps the public constantly in mind has been critical to understanding what we need to do to repair the society Covid-19 itself has exposed.” The full longlist is:

The five judges for the 2021 Orwell Prize for Exposing Britain’s Social Evils are: Paul Kissack (chair), Group Chief Executive of the Joseph Rowntree Foundation and previously a Director General in the UK Government on the national response to Covid-19; Ian Birrell, whose investigation into abuse in the NHS was awarded The Orwell Prize for Exposing Britain’s Social Evils in 2020; Professor Donna Hall CBE, chair of the national think tank New Local and the chair of Bolton NHS Foundation Trust; Director of Strategy and Policy for the Children’s Commissioner, Alice Miles; and Rianna Croxford, award-winning investigative journalist at BBC News.

The shortlists for all prizes will be announced later in the spring, while the winners of the prizes, which are both worth £3,000, will be unveiled around George Orwell’s birthday, 25th June 2021. We would like to thank our sponsors, The Political Quarterly, The Joseph Rowntree Foundation, A.M. Heath, and Richard Blair, for their continued support and making The Orwell Prizes possible.

For more information about this year’s prizes, and for media resources, please contact the appropriate prize administrator: 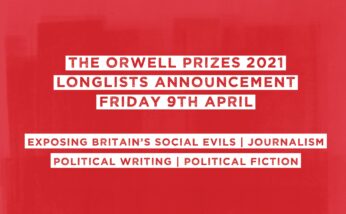